Average single-family home prices in Switzerland’s four wealthiest markets rose 9% to CHF 1.42 million in 2021, while average apartment prices rose 8.3% to CHF 910,000, representing the biggest rise in prices of privately owned homes in a decade. After declining in 2020, the market for second homes grew 35% last year. With a limited number of available properties, fluctuations make the market for second homes an ideal target for real-estate speculation. The analysis is based on actual selling prices of privately owned homes provided by the Swiss Real Estate Data Pool.

All arrows point upward in this year’s Home Market Price Analysis. The analysis, which Homegate publishes in partnership with the Swiss Real Estate Institute, provides information about price trends for actual selling prices of family homes and apartments in the Bern, Lake Geneva, Northwestern Switzerland and Zurich regions.

According to the analysis, privately owned homes remained an attractive form of investment and housing for many people in Switzerland. Given the limited availability of property and still high demand, it’s hardly surprising that overall prices also rose in 2021. Martin Waeber, Managing Director of Real Estate at Swiss Marketplace Group, believes the shift seen at many banks with respect to mortgage interest rates won’t put an end to this trend. ‘Since many banks raised their mortgage interest rates at the beginning of the year, this price trend could flatten as the year goes on. However, we can hardly expect a fall, given the still high demand and long-term hedging of many Swiss households against rising interest rates.’

Apartment prices in Zurich showed the second-highest growth rate among the four regions analysed, with an increase of 8%, thus maintaining the city’s top position. With average property prices of CHF 1.08 million, prices in Zurich were significantly higher than the Lake Geneva region, which saw the greatest increase. Following declining prices in the region in 2020, a rebound effect was observed during the reporting period. The average apartment now costs CHF 980,000, after price growth of 8.9%. With an average price of CHF 680,000 (+6.3%), apartments in Bern are the most affordable, followed by those in the Northwestern Switzerland region with an average price of CHF 760,000 (+5.6%).

However, increases in apartment prices measured per square metre of floor space were almost twice as high in the Lake Geneva region, with 9% compared to the Zurich region (4.9%). Nevertheless, at CHF 10,900, Zurich continues to have the highest square-metre price among the four regions analysed.

Apartments registered as second homes exhibited a price increase of 35% in the reporting year, following a marked decrease of 20% in 2020. ‘The price increases for primary residences is truly remarkable. However, when it comes to second homes, the second homes initiative created the ideal market for real-estate speculation by imposing strict limits on the number of available properties,’ explains Peter Ilg, Director of the Swiss Real Estate Institute. Holiday home prices have become equally volatile since the initiative was implemented. Despite the huge increase in prices, the number of holiday home transactions increased still further in 2021 in the four regions analysed (from 89 in the previous year to 154). This increase also indicates price speculation for second homes, which are not bought primarily for owner occupancy, but to sell later at a higher price.

Average prices for single-family homes rose the most in Northwestern Switzerland, with an increase of 11%, followed by the regions of Lake Geneva (9.7%) and Bern (9.1%). With an increase of 7.7%, the Zurich region showed the slowest price growth of all regions analysed. For single-family homes, the price gap between the most expensive (Lake Geneva; CHF 1.69 million) and least expensive region (Bern; CHF 960,000) increased compared to the previous year.

At the municipal level, the most affordable single-family homes were sold in the municipality of Moutier (BE) for CHF 500,000 on average, while the most expensive were sold in Erlenbach (ZH) for CHF 3.1 million. The same budget needed to buy one single-family home in Erlenbach could buy six of them in Moutier. The price differences were even greater for apartments. The lowest average apartment prices were found in Sainte-Croix (VD) (CHF 280,000), and the highest in Zumikon (ZH) (CHF 2.37 million). 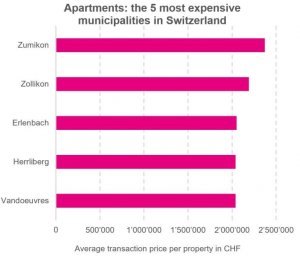 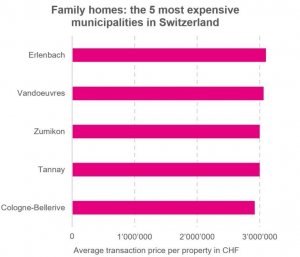 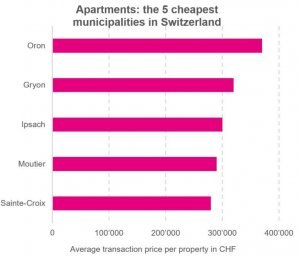 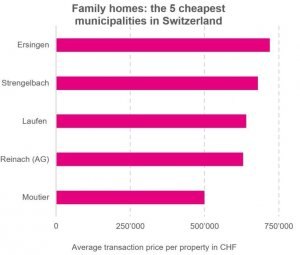 Home Market Price Analysis
The Home Market Price Analysis is an annual analysis of trends in actual sales prices for family homes and apartments. The analysis covers the four Swiss regions with the highest number of property transactions. The analysis provides regionally differentiated information broken down by market segment on property price trends in these regions. The database is provided by the Swiss Real Estate Datapool (SRED), which is a non-profit association of Credit Suisse, UBS and Zürcher Kantonalbank. They supply the data pool with sales prices and other property details for all the property transactions they finance.

Homegate publishes the analysis in partnership with the Swiss Real Estate Institute at the University of Applied Sciences in Business Administration Zurich.