The coronavirus crisis and associated restrictions put an abrupt end to the stability in home moves. In April, home moves fell by 6% across Switzerland, and by as much as 15% to 30% in western Switzerland and Ticino.

Trends in home moves in Switzerland were stable overall until the pandemic hit this spring. This is evidenced by an analysis of redirection orders received by Swiss Post in the period between January and June 2020. Although March this year was up almost 3% on the previous year, April saw a significant drop: across Switzerland, 6% fewer households moved compared with the previous year. In May, the effects of measures to prevent spread of the virus and the reluctance of the population to move was still palpable. The figure was down 1% on the previous year. The recovery then began in June. Suspended home moves picked up again and were 1% up on the previous year. 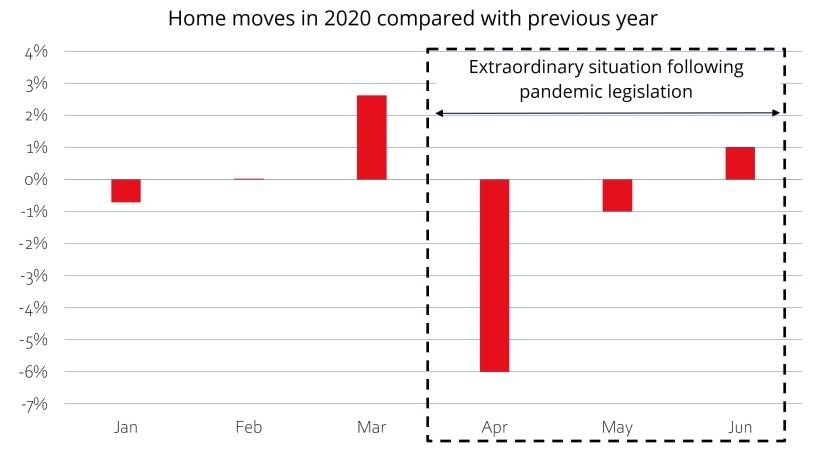 In some regions, the pandemic had a major impact on home moves. A cantonal evaluation reveals that the western Swiss cantons (VD, GE, NE) and Ticino were much harder hit, with 15% to 20% fewer households moving in April. 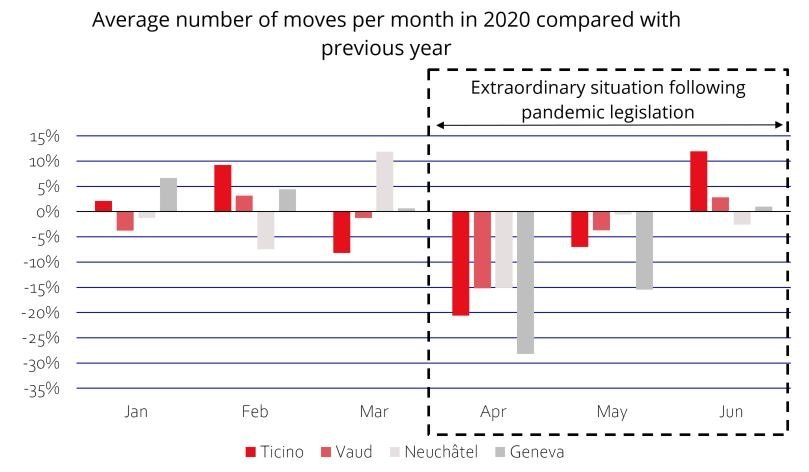 The number of moves was much lower in the months of April and May in particular. This is unquestionably linked to the higher infection rates and more restrictive measures in these cantons. Ticino is of particular interest: the decline in home moves began here in March, due to geographical proximity to the virus outbreak in northern Italy. Conversely, June saw a recovery effect. In June 2020, move rates had risen to 10% more than the previous year. On the whole, restrictions imposed in non-German-speaking regions of Switzerland went further than those applied across the country. Cantons Geneva and Ticino temporarily closed building sites, bringing projects that were close to completion or purchase to a standstill. 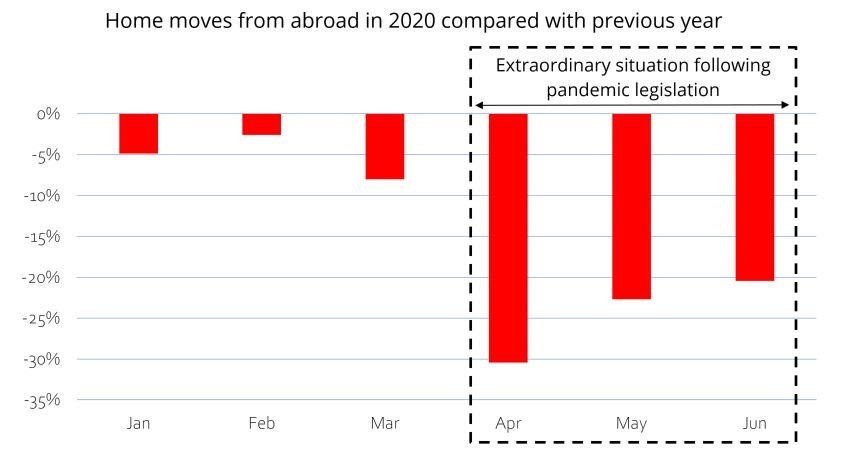 Furthermore, restrictions on individual freedom of movement made relocation abroad more difficult. Moves abroad were 30% and 20% lower than the previous year in April and June respectively. The effect of the pandemic therefore lasted much longer than for domestic relocations. Cantons with borders with Italy and France showed a greater decline than those bordering Germany and Austria. 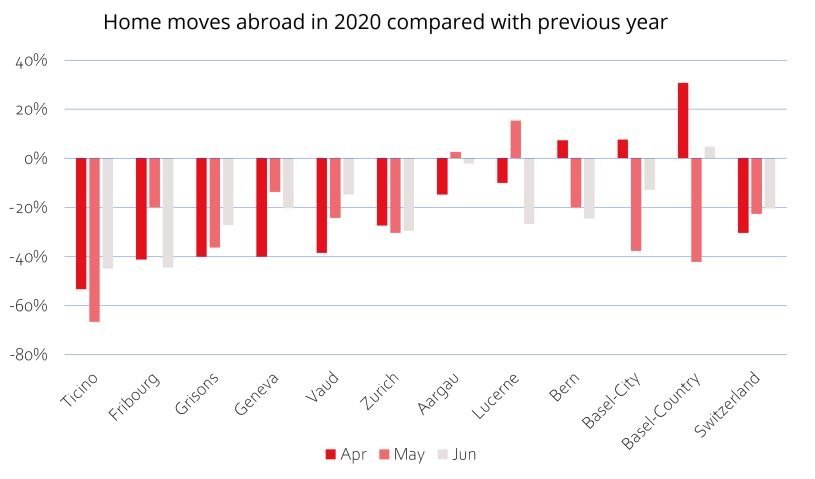 Home moves at the beginning of the coronavirus crisis

The situation was precarious in early spring. The Federal Council gradually introduced emergency laws applicable across Switzerland from 16 March and initially advised against moving home. However, real estate associations, removal companies and property managers spoke out wholeheartedly against blanket restrictions on home moves. Solutions were found for home hand-overs and purchases, and the Federal Council made recommendations accordingly. The issue was hotly debated, as 31 March is a local termination date in almost every canton. Notice of termination given, recently concluded rental contracts and paid tenant deposits were in limbo.

However, the Federal Council ultimately followed the recommendations of interest groups and on 27 March issued a decree that relocation in compliance with the Federal Office of Public Health’s guidelines on hygiene and social distancing was permitted. This benefited all those who had already planned their moves on the ordinary date of termination. These moves were thus possible in April and May. This arrested the decline across Switzerland, although it was highest in virus-hit Ticino and the parts of western Switzerland that border France. Before the pandemic, however, home moves had long remained stable.

As mentioned above, the unprecedented situation surrounding coronavirus caused a major collapse in home moves. This kind of decrease is a special case, since generally relocation is highly stable. This is shown by an evaluation of the past few years that calculates an annual move rate.

The move rate considers the number of moves in relation to housing stock and measures liquidity in the property market. The higher the move rate, the more fluid the situation in a market region. Moves are broken down into three categories: within a canton (e.g. district or municipality), from the rest of Switzerland and from abroad.

Just under 425,000 households moved home in Switzerland from January to December 2019. This put 2019 in a very similar bracket to the three previous years. Moves from abroad, at about 65,000, were slightly below the long-term average, but a little higher than in the relocation study of three years previously. The move rate in 2019 was 9.3%, meaning that about one in 11 Swiss households moved home. Smaller households of one to two people were the most mobile.

There is no great shift in move rates at a district level. Between 2017 and 2019, there was still a high level of fluidity in the arc between Mittelland and Lake Constance.

The highest rates of over 10% are unchanged in the cities and city cantons, particularly in Zurich and Lausanne, at 13.3% and 12.3% in 2019 respectively. The reason for higher move rates in the major cities is not just down to the more fluid situation on the job and rental market, but the significantly higher level of immigration. In Zurich, this accounts for a quarter, and in Geneva and Lausanne, as much as a third. 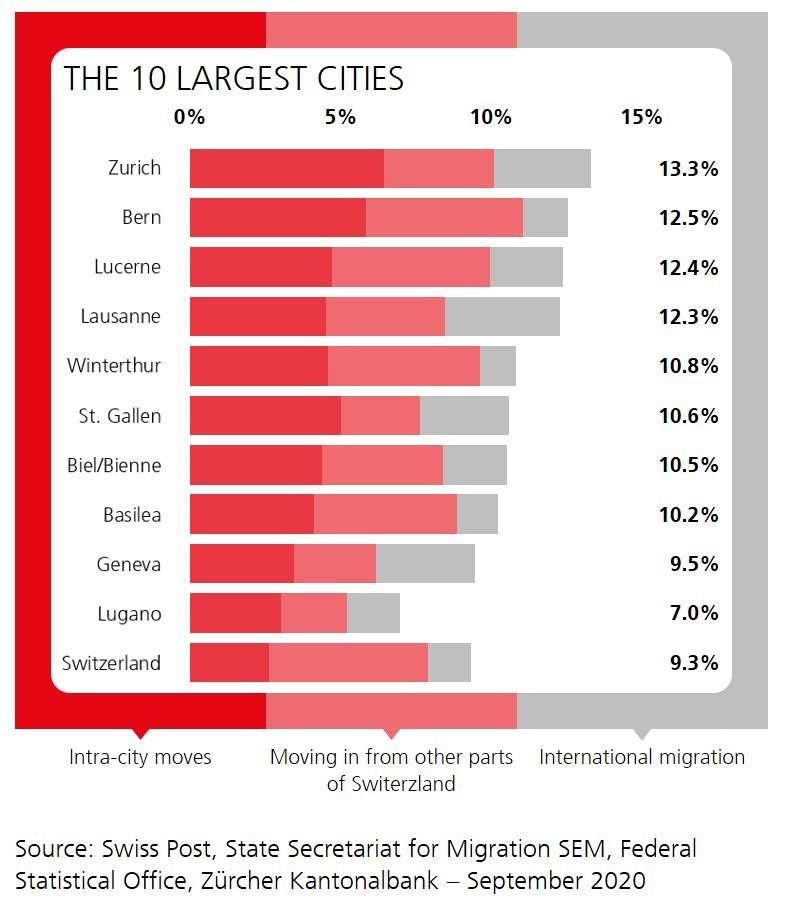 The connection between relocation and housebuilding is best illustrated by the following graphic showing district-level analysis. The image shows the move rate and rental property construction; i.e. the number of new homes built each year in relation to housing stock.

Another piece of important information is a region’s rental property vacancy rate. It provides information on the regional market outcome; i.e. whether the newly created supply is absorbed by demand. The Zurich districts of Dietikon, Uster and Bülach are examples of markets that work well. In these areas, there is a comparatively high level of construction of rental properties. More living space is created here than virtually anywhere else, but vacancy rates are low, at 1.2% to 1.8%, as enough people are moving into the newly built homes. This is also shown by the relatively high move rates here, from 9.6% to 11.4%.

Relocation and construction of rental properties in districts

The picture is different in Ticino, where significantly lower move rates go hand in hand with minimal construction activity. The districts of Locarno, Lugano, Mendrisio and Bellinzona bring up the rear in terms of move rates, also seeing relatively low levels of rental property construction (mostly under 1%). Following the trend of recent years, vacancy rates are higher than elsewhere, due to the increase in construction activity over the past few years.

Relocation flows under the microscope

This year’s homegate.ch relocation report in collaboration with Zürcher Kantonalbank is published for the fifth time. And 2020 also includes a new type of analysis: relocation flows have been evaluated for the first time. Thus, the analysis takes a close look at the specific relationships between origin and destination. In other words, it shows how many households have moved from one place to another – for instance, from Zurich to Bern – over the course of a year. You can do your own analysis at a municipal level in 2019 below. First, however, an in-depth analysis of relocation flows for the Zurich and Aargau urban areas will follow.

For years now, the city of Zurich has been by far the most fluid. This comes as no surprise. Due to the situation on the job and education market, the city remains a magnet, which is why a great deal of construction activity takes place here. The move rate within the city was as high as 13.6%, with average periods of occupancy of about seven years. This relatively short period of time is due to the fact that most people rent in Zurich. Another factor is the effect of increasingly popular furnished properties, which permit much shorter periods of occupancy. Like other cities, Zurich also attracts immigrants, who make up a quarter of all moves to the area. However, moves within the city dominate, as before, with 48% of households moving home within the city limits. This is revealed by the first local neighbourhood analysis.

Most moves in the west of Zurich

Relocation dynamics in Aargau are driven by the middle centers

The largest proportion of new residents to the cantonal capital Aarau comes from the other cantons. There is a lively flow of people moving between Aarau and the neighboring villages of Buchs and Suhr, and to a lesser extent with the village of Aarau Rohr. In absolute terms, most of the new residents settle in Aarau, the capital of the canton. Other agglomerations with a high number of bilateral migration flows are located between Baden-Wettingen-Neuenhof, Baden and Ennetbaden and between Lenzburg and Staufen. In contrast to the cantons of Zurich and Vaud, where inner-cantonal relocations dominate and the cantonal capitals play a major role, the relocation dynamics in Aargau are thus driven from outside by moves from other cantons and within by a lively dynamic between the middle centers and their agglomerations, namely Aarau, Baden or Lenzburg.

Would you like to perform your own municipal home move analysis? It’s easy! Just enter ‘from’ or ‘to’ and your municipality*. ‘to Zurich’, for instance, will show moves only to the city of Zurich. If you’re interested in a move from Bern to Zurich, for instance, type ‘from Bern to Zurich’. Happy searching!
*Please note that you must enter the official name of the municipality as stipulated by the Federal Statistical Office (FSO). You can find a list of these here.

Homegate AG was founded in 2001 and is now the leading digital company on the Swiss property market. With more than nine million visits per month and about 110,000 current properties advertised, homegate.ch is Switzerland’s number one property marketplace. Homegate AG employs more than 125 people at its Zurich headquarters and Lausanne branch. Homegate AG is part of TX Markets (tx.markets).