The year under review saw the prices of family homes and apartments in Switzerland’s four wealthiest market regions (Zurich, North-West Switzerland, Bern and Lake Geneva) rise by 3.3% and 1.7% respectively on the previous year. Average prices vary dramatically between regions: while the average family home cost CHF 1.305 million in the most expensive region, Lake Geneva, homes in the cheapest region, Bern, cost 40% less on average, at CHF 770,000. The differences between the most expensive and cheapest municipalities within a region were also staggering, even in those in relatively close proximity. The analysis is based on actual sales prices from the Swiss Real Estate Data Pool (SRED).

In the year under review, from 1 January to 31 December 2019, about 3,200 family homes and 4,900 apartments in the four wealthiest market regions were recorded with their actual sales prices in the SRED. The previous year, the figures were 3,100 and 4,500 respectively.

The Lake Geneva region has held its position as the most expensive region in Switzerland, with a price increase for family homes of 3.6% to CHF 1.305 million. The cheapest region for people to fulfil the dream of owning a home is Bern. On average, a house there cost CHF 770,000. 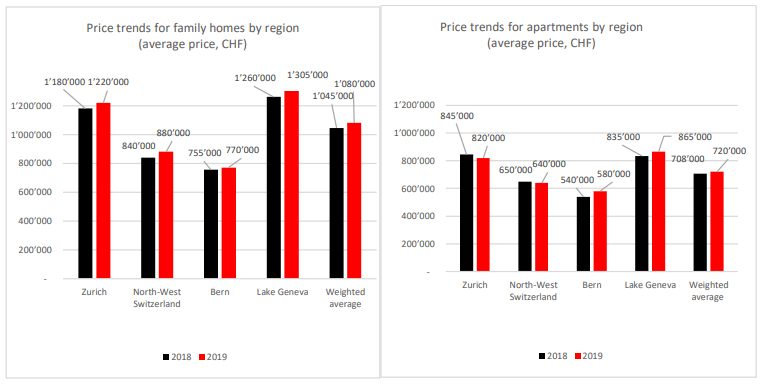 On the whole, apartments were 1.7% more expensive than the previous year. With a price rise of 3.6%, the average apartment in the Lake Geneva region cost CHF 865,000. However, in comparison with the previous year, the region of Zurich saw a drop of 3% to CHF 820,000 in 2019. In the region of North-West Switzerland, apartment prices also fell 1.5%.
Interestingly, prices per square metre of living area rose in all four regions. This means that in comparison with the previous year, a higher number of smaller and therefore cheaper apartments were sold in the regions of Zurich and North-West Switzerland.

The highest average prices for family homes were recorded in the city of Geneva, at CHF 3.57 million. The cheapest family homes were found in the municipality of Schüpfen, Bern, at just under 10 times cheaper, going for an average of CHF 380,000. In total, 133 properties with average transaction prices of less than CHF 650,000 were recorded in the SRED data pool for the Bern region. However, cheaper municipalities could also be found in the expensive regions of Zurich and Lake Geneva, such as Fischenthal and Gryon. There, family homes were available for CHF 670,000 and CHF 740,000, respectively. In Fischenthal, which is just 30 minutes’ drive from the Gold Coast, five family homes went for the price of a single house in Küsnacht.

The Home Market Price Analysis is an annual analysis of trends in actual sales prices for family homes and apartments. The analysis covers the four Swiss regions with the highest number of property transactions. The analysis provides regionally differentiated information broken down by market segment on property price trends in these regions.

The database is provided by the Swiss Real Estate Pool (SRED), which is a non-profit association of Credit Suisse, UBS and Zürcher Kantonalbank. They supply the data pool with sales prices and other property details for all the property transactions they finance.

homegate.ch publishes the analysis in partnership with the Swiss Real Estate Institute at the University of Applied Sciences in Business Administration Zurich.

Homegate AG was founded in 2001 and is now the leading digital company on the Swiss property market. With more than nine million visits per month and about 110,000 current properties advertised, homegate.ch is Switzerland’s number one property marketplace. It allows all prospective buyers to browse the full range of available properties in one place, without the need to visit different platforms. Homegate AG employs more than 125 people at its Zurich headquarters and Lausanne branch. Homegate AG is part of the Swiss media group Tamedia AG. Zürcher Kantonalbank also holds shares in the company.

The Swiss Real Estate Institute is a foundation established by the University of Applied Sciences in Business Administration Zurich and SVIT Schweiz. In addition to research, the institute focuses on teaching and services/consulting for the Swiss property industry. www.swissrei.ch