Condominiums are in even greater demand throughout Switzerland than in previous periods. This is demonstrated by the Online Home Market Analysis (OHMA) of homegate.ch and the Swiss Real Estate Institute of HWZ Zurich University of Economics. In all of Switzerland and practically all regions examined, the average advertising time was shortened. This happened despite the fact that the number of condominiums advertised on the Internet increased. Supply and demand were analysed based on the listings of the four major Swiss real estate marketplaces between July 1, 2018, and June 30, 2019, compared to the previous period.

In the reporting period from July 1, 2018, to June 30, 2019, around 77,000 condominiums were offered for sale on the Internet throughout Switzerland, an increase of 9.7% over the previous period. The average advertising time has declined noticeably despite this increase in supply. A condo had to be advertised an average of 61 days to find a buyer. Compared to the previous period, this represents a decrease of nine advertising days (-12.9%). The simultaneous increase in supply connected with a decrease in the average advertising period speaks for robust demand growth for condominiums in Switzerland.

The historical trend in the supply volume and average advertising time proves the Swiss condominium market has returned to its growth path over the past two years. The steadily growing number of condominiums offered on the Internet since the second half of 2017, coupled with a continuous decline in the average advertising duration from over 100 days to 61 days, points to sustained supply expansion.

Prof. Dr. Peter Ilg, director of the Swiss Real Estate Institute at HWZ Zurich University of Economics, explains the growing demand. «The persistently good economic situation, long-term low interest rates and low unemployment rate give private households ideal economic conditions to venture into a long-term investment in their own home; usually the largest investment in the life cycle of a private household. In addition, research shows that buying up to a mortgage interest rate of 2% is much cheaper than renting. In order to meet the high requirements of the banking supervisory authority for the affordability of a mortgage, around one-third of the buyers have to resort to loans from the family environment.»

Apartments in Zurich, Espace Mittelland and Northwestern Switzerland are the quickest to find a buyer

The largest reduction of oversupply and the closest approximation to the total Swiss media advertising time (61 days) was in the two regions of Ticino (-22 days change) and Eastern Switzerland (-24 days change in  period). With an increase of the advertising time by one day, from 59 to 60 days, the region of Zurich was the only region to extend the announcing period.

Comparing the change in the advertising period and supply volume allows conclusions to be drawn on demand dynamics. In the Zurich region, for example, the number of announcements increased by 20% over the previous period. Insertion time was only slightly prolonged by one day. As a result, the Zurich region falls into the area of «increasing demand» in the graph below. In Geneva and the Vaud/Valais region, average insertion times were down sharply at 11.6% and 6.2%, respectively, compared to the (relative) supply declines (-11.5% and -4.7%, respectively). This indicates a stable to slightly decreasing demand. 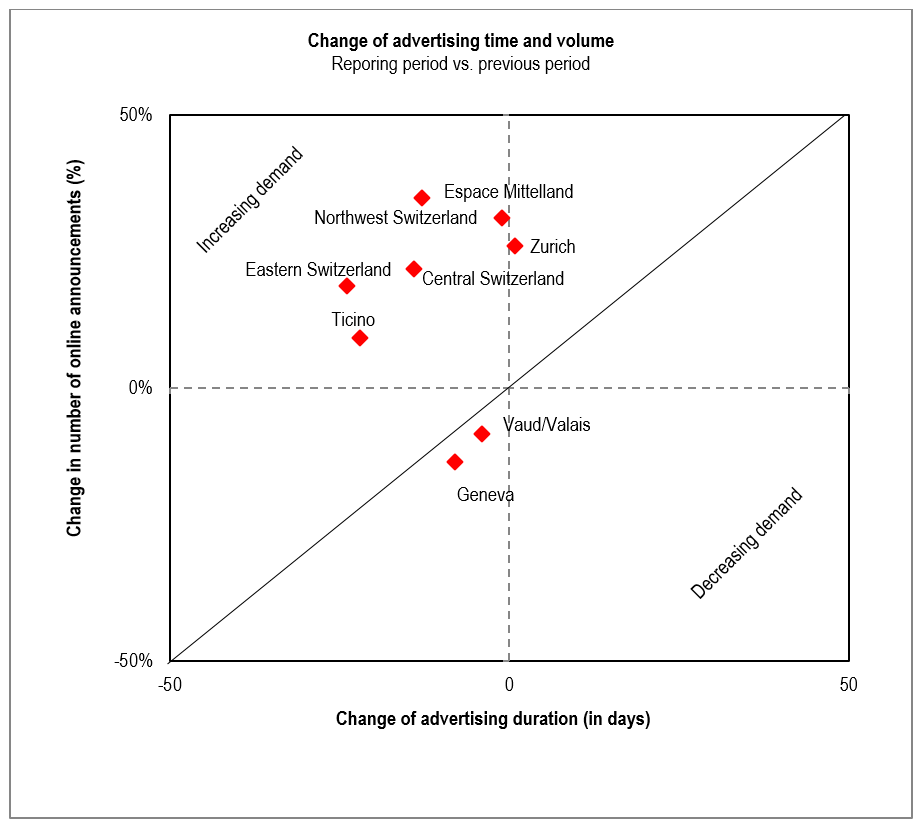 OHMA is a biannual analysis that reports alternately on the advertising period development of single-family homes and condominiums in all major Swiss online marketplaces. The analysis covers the whole of Switzerland with eight major regions examined. In-depth analyses are carried out for suburban communities or centres. The analysis provides information on the supply and demand development for private homes, broken down by region and market segment.

Homegate.ch publishes the analysis in collaboration with the Swiss Real Estate Institute of HWZ Zurich University of Economics.

Swiss Real Estate Institute is a foundation of HWZ Zurich University of Economics and the Swiss Association of the Real Estate Industry SVIT Switzerland. In addition to research, the institute concentrates on teaching and service/consulting for the Swiss real estate industry. www.swissrei.ch