Tenant-Landlord Relations: More than one-third of all tenants surveyed have had problems with their landlord

34% of all Swiss tenants surveyed admit to having had problems at one time or another with their landlord. 58% of the reasons cited for run-ins with their landlord are repairs that have not been carried out or repairs that have been poorly carried out. By comparison, multi-person households with children (37%) or households with incomes exceeding CHF 10,000 (41%) have trouble with the landlord. Once various factors ultimately cause a tenant to move out, 30% of all respondents said they have used a moving company. These are the results of a survey that homegate.ch recently conducted on the housing situation in Switzerland.

Over a third of Swiss tenants surveyed say they have had problems with their landlord at one time or another. When it comes to disputes, things that have needed to be repaired but have not been fixed or repairs that have been improperly carried out (58%) are far and away the biggest complaints the respondents cited. Other rankings indicate regional differences. In German-speaking Switzerland, mildew problems, construction work, billing for services or confrontations between people (25%) sometimes cause trouble. In French-speaking Switzerland, the second-most cited complaint is rent increase (39%), followed by noise or interference from other tenants (37%). Ticinese tenants are particularly annoyed by unpleasant rent increases (42%) and their utility bills (29%).

Things that need to be repaired but have not been are equally irritating to women and men. But when it comes to rent increases, women are more likely to complain (W: 27%, M: 15%). Unequal salaries might play a role in this discrepancy between men and women complaining about rent increase. 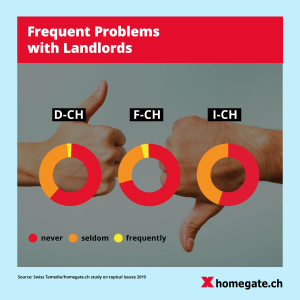 Moving companies are gaining in popularity 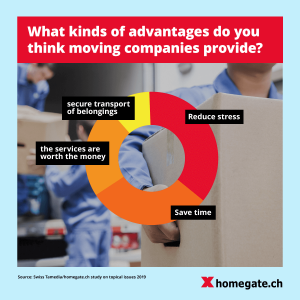 The representative study includes a systematic analysis of the housing situation of people living in Switzerland. 1,294 persons ranging in age from 18 to 74 were interviewed in German-, French- and Italian-speaking Switzerland.

Homegate AG was founded in 2001 and has since developed into the leading digital company in the Swiss real estate market. This study surveyed 1,294 persons ranging in ages from18 to 74 who live in German-, French- and Italian-speaking Switzerland. Homegate AG employs more than 100 people at its headquarters in Zürich, Lausanne and Berlin. Homegate AG is part of the Swiss media Tamedia AG group; another shareholder is Zürcher Kantonalbank.