Must-Haves when Apartment Hunting: Good traffic connections, a balcony and a short commute

Good traffic connections, a balcony or seating area and a short commute are the top three criteria people are looking for when searching for an apartment. One third of those polled (33%) would be ready to move for their job as long if their commute were currently longer than 54 minutes. These are the results of a survey that homegate.ch recently conducted on the housing situation in Switzerland.

The most important criteria when searching for an apartment include good traffic connections (40%), a balcony or seating area (37%) and a short commute (28%). But these percentages vary by region. Whereas those hunting for apartments in the German- and French-speaking parts of Switzerland place a higher priority on good traffic connections (21%) and a balcony (16%) as being their number one criteria when apartment hunting, the Ticinese who were polled feel that a short commute (20%) and the ability to have pets (20%) are the most important criteria. These priorities vary even between the sexes: Women increasingly want a balcony or a seating area (21%). Good traffic connections (22%) are the most important criteria for men. 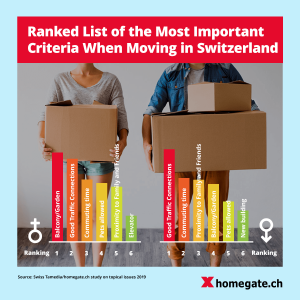 Almost two-thirds of survey respondents find it difficult to find suitable housing. Women (72%) and low-paid workers (69%) rate the search as laborious. The gender difference (only 58% of men find apartment hunting laborious) can probably be attributed to the fact that when couples are apartment hunting, it is usually the woman who is responsible for looking for property.

The Swiss are increasingly wary of long commutes

Looking at the whole of Switzerland, more than half of the respondents (57%) commute for 20 minutes or less. Only one sixth of respondents (17%) commute more than 40 minutes. Only 46% of respondents commute five times a week. The others either work part-time or occasionally work from home.
Thirty-six per cent of those surveyed in German-speaking Switzerland would consider moving only if their current commute were an average of 58 minutes. The Romansh and Ticinese, however, would move if their commute were between 37 and 42 minutes (FCH: 24%; ICH: 37%). When asked about their willingness to relocate, 72% of the Swiss respondents would move if they currently had a daily commute of more than 30 minutes. Apart from regions, differences also exist between the sexes and households. Men (39%) and single-person households (47%) in particular would be willing to move for their job. 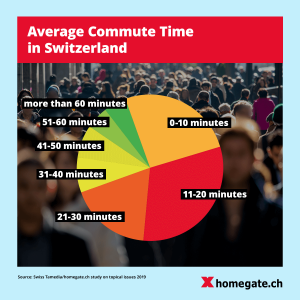 This representative study includes a systematic analysis of the housing situation of people living in Switzerland. 1,294 persons ranging in age from 18 to 74 were interviewed in German-, French- and Italian-speaking Switzerland.