Animal Lovers: Almost half of the Swiss population owns a pet

41% of all Swiss people own a pet. Of these, the majority (65%) have one or more cats, followed by dogs (31%) or rodents (13%).  These are the results of a survey recently conducted by homegate.ch, the largest real estate website in Switzerland, on the housing situation in Switzerland.

Almost half of the Swiss own one or more pets. It is even more than half (51%) in multi-person households with children. Singles own way fewer pets. Not even a quarter of them (24%) live with a dog, cat or mouse. That way, they stay flexible and can look forward to their next travel destination without having to worry about who will take care of their pet. 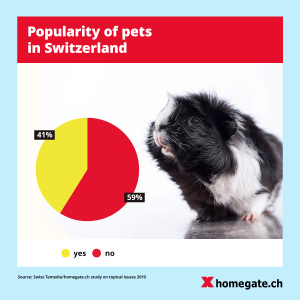 Cats (65%) are the most popular pets, followed by dogs (31%), rodents (13%), fish (6%) and reptiles (5%). Around half of all cat owners own one cat; 35% even own two. Other pet owners who own rodents, fish, reptiles and birds usually also own more than one. In most cases (82%), only dogs have to go it alone without another doggie playmate in the house.

The best animal friend for Swiss women is a cat. 71% of the surveyed pet owners have a “Büsi,” with men the number is 58%. Dogs are 37% more common in male households, while only 26% of women like to take the dog for a walk. 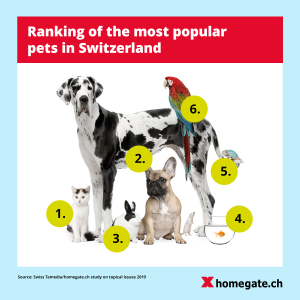 All graphics of the survey (in German only)

The representative study comprises a systematic analysis of the housing situation of people living in Switzerland. 1,294 persons aged between 18 and 74 were interviewed in German-, French- and Italian-speaking Switzerland.

About the Homegate AG

Homegate AG was founded in 2001 and has since developed into the leading digital marketplace in the Swiss real estate market. With more than 8.5 million visits per month and over 100,000 current properties on offer, homegate.ch is the number one Swiss real estate website. Homegate AG employs more than 100 people at its headquarters in Zurich and in Lausanne. Homegate AG is part of the Swiss media group Tamedia AG; another shareholder is Zürcher Kantonalbank.