Manual work and chores well in hand: ironing and bathroom cleaning are the least-popular household chores

Swiss people show a knack for doing their own DIY work. Ninety-eight per cent of survey respondents are willing to replace their own light bulbs, 84% are willing to screw/nail in objects around the house, and 59% are willing to do their own yard work. Ironing is the least-popular household chore for 27% of respondents, followed by cleaning the bathroom (23%), with dusting at 14%. These are the results of a survey homegate.ch recently conducted regarding the housing situation in Switzerland.

A country of people willing to get their hands dirty

Swiss people like to do their own DIY work. Most survey respondents replace their own light bulbs (98%), screw/nail in their own household objects (84%) and do their own gardening/yard work (59%). More than half of the interviewees (56%) even try to do their own plumbing jobs themselves. 30% of Ticino residents, however, would rather avoid this type of work. Even singles generally shy away from DIY work as opposed to people who live as a couple or with a family. Well-to-do (over CHF 10,000 income per month), however, seem to like getting the job done themselves. 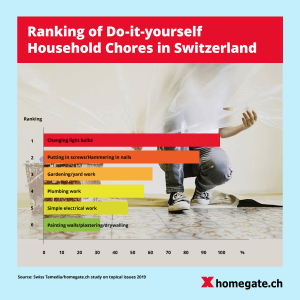 Ironing and bathroom cleaning are the most-hated chores

In terms of household chores, ironing (27%) and cleaning the bathroom (23%) rank first and second as the most-hated tasks. Only the Ticinese prefer wiping down the bathroom. They also hate taking out the trash more than anyone else.

The Swiss love to cook

The Swiss who were surveyed seem to be in their element when it comes to cooking. Forty-two per cent answered that it was their favorite activity in their own household, and this held true across all language regions. Men and women responded in much the same way to the survey questions. The respondents who most like to cook are part of multi-person households without children (47%) and upper-income households (49%). Grocery shopping is the number-two favorite activity at 22%, followed by laundry at 11%. 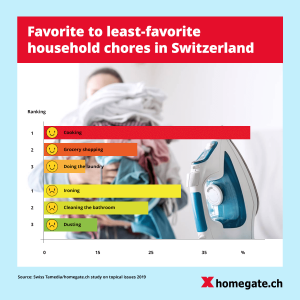 All graphics of the survey (in German only)

The representative study includes a systematic analysis of the housing situation of people living in Switzerland. 1,294 persons ranging in age from 18 to 74 were interviewed in German, French- and Italian-speaking Switzerland.