21% of Swiss people have some kind of problem with their neighbors at least once a week. In western Switzerland, as much as 25% of the population is upset. Singles and lower-wage earners are also more dissatisfied with their neighbors. Noise, stench and screaming children are the leading reasons for dissatisfaction. These are the results of a survey homegate.ch recently conducted on the housing situation in Switzerland.

Those earning well have nerves of steel 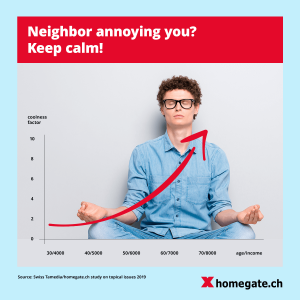 Twenty percent of Swiss people feel irritated at least once a week by their neighbors’ behavior. Only just under a third of the population are not at all annoyed because they either have no neighbors or they leave them in peace. What’s surprising is that single households feel annoyed more frequently. Those with the toughest nerves apparently have households with a monthly income greater than CHF 10,000.-. Even the older generation (55+) seem to keep a cool head and hardly feel annoyed at all in comparison.

Noise the no.1 reason for aggravation 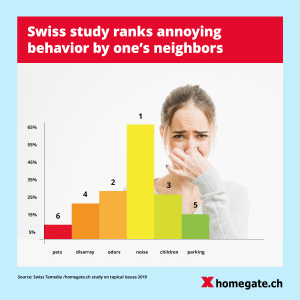 Noise from disputes, screaming children and loud music is the most common reason why other neighbors feel aggravated.This was confirmed as the main reason for irritation across all language regions.. Obnoxious odors (29%), annoying children (28%) and disorder in shared spaces (23%) continue to to be the leading factors that bother neighbors. In Ticino, people are more likely to be bothered by parking problems (35%), while in western Switzerland, children are perceived to be more annoying (41%). Younger people tend to (14-34 years) feel much more annoyed by noisy children than other age groups.

One’s own home is entrusted to the parents

Nevertheless, 21% of respondents said that they would trust the neighbors to look aftertheir homes if thez were awaz,—are friends or other acquaintances. Only parents and parents-in-law were cited more often at 35%. In Ticino, people are more skeptical and less trusting of their neighbors (9%). The oldest surveyed group (55+) is more willing than average (35%) to entrust their own home to their neighbors, often because one’s own parents are no longer alive and friends might live farther away. The most skeptical parts of the population include are low-wage earners and singles.

All graphics of the survey

The representative study includes a systematic analysis of the housing situation of people living in Switzerland. 1,294 persons ranging in age from 18 to 74 were interviewed in German, French and Italian-speaking Switzerland.