Online Home Market Analysis (OHMA): No end in sight for the boom in demand for family homes

The demand for family homes is currently at its peak. With over 34,000 detached homes on the market, almost 6’000 more properties are available than in 2015 (+17%). At the same time, the average advertising time for properties on Swiss online property portals has sunk to 81 days (2016: 104 days) despite the higher number of properties available, which shows the extremely high level of demand. Houses are being snapped up the fastest in the Zurich region (after 48 days), while houses in the Waadt/Wallis and Tessin regions are spending almost twice as long on the market (90 days and 92 days respectively). This information has been collected for the Online Home Market Analysis (OHMA), carried out by homegate.ch in collaboration with the Swiss Real Estate Institute of the HWZ University of Applied Sciences in Business Administration in Zurich.

Reasons for the boom in family homes

After achieving a peak in the average advertising time of 104 days in 2016, the advertising time in 2018 reduced to 81 days (cumulative reduction since 2016: -22%), which reflects the continuously increasing demand for family homes when considered in combination with the higher number of properties on offer. Demand seems not to be slowing down despite a noticeable increase in home ownershiprate (to almost 40%), the significant intensification of the regulation of mortgage funding which started in 2014 and the record-high house prices. Prof. Dr. Ilg from the Swiss Real Estate Institute of the HWZ University of Applied Sciences in Business Administration believes there are three reasons for this astonishing development: “Firstly, in 2018, total real economic growth was higher than it has been for 8 years at 2.5%. Secondly, the fears that the period of negative interest was almost over have been quashed. The extraordinarily low mortgage interest rates have stuck around a lot longer. Thirdly, saving is still not something people are interested in due to the lower interest rates.” 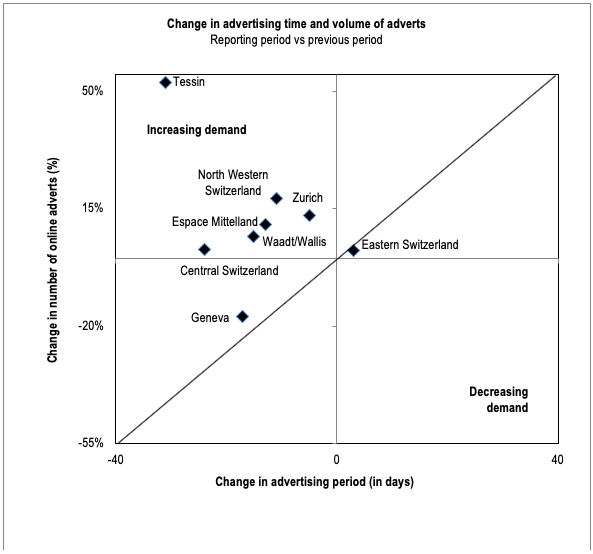 If you look at the change in advertising times and the number of advertised properties, you can draw conclusions on the change in demand for family homes: all the regions in the study are found in the corner for increasing demand, with the exception of Eastern Switzerland (see graph above).

Increasing prices but continued pronounced differences in prices across regions

The highest average prices for family houses again concerned those in the Geneva area. In the suburban areas in this region, a square meter of living space was marketed for CHF 10,300 (2017: CHF 10,200). In the reporting year, a square meter in the metropolitan areas of the cities in the most price-friendly regions, Espace Mittelland and Eastern Switzerland, cost around half of this at around CHF 5,600. In the middle of this are the regions of North Western Switzerland (2018: CHF 6,600 per square meter living space; 2017: CHF 6,400) and Waadt/Wallis (2018: CHF 7,500 per square meter living space; 2017: CHF 7,200).

The OHMA is a semi-annual analysis which reports on an alternating basis on the development of the advertising period required for family homes and flats posted on all important Swiss online market places. These analyses cover the whole of Switzerland, investigating all eight large regions. Deeper analysis is sometimes carried out on suburban areas in comparison with city centres. These analyses give regionally differentiated information broken down into market segments regarding the development of the market and the demand for family homes.

homegate.ch publishes the analysis in collaboration with the Swiss Real Estate Institute of the HWZ University of Applied Sciences in Business Administration in Zurich.

Homegate AG was founded in 2001 and has since developed into the leading digital company in the Swiss property market. With more than 8 million visitors as well as over 100,000 current properties on offer, homegate.ch is No. 1 on the list of Swiss property portals. At the company headquarters in Zurich and in Lausanne, Homegate AG works with more than 90 employees. Homegate AG belongs to the Swiss media group Tamedia AG and one of its shareholders is the Zürcher Kantonalbank.

The Swiss Real Estate Institute is a foundation managed by the HWZ University of Applied Sciences in Business Administration in Zurich and the Swiss Real Estate Federation SVIT Schweiz. The institute focuses on the areas of teaching and service provision/consultation for the Swiss property market as well as conducting research. www.swissrei.ch