Online Home Market Analysis (OHMA): the demand for condominiums is booming once more

Condominiums are again in greater demand throughout Switzerland. This is shown by the Online Home Market Analysis (OHMA) of homegate.ch in collaboration with Swiss Real Estate Institute of the HWZ Hochschule für Wirtschaft Zurich (Zurich University of Business). In each region, the average property listing time has been greatly reduced, even though the number of condominiums offered on the Internet has increased in most areas studied. The offer and demand were analyzed based on advertisements of all major Swiss real estate marketplaces between July 1, 2017, and June 30, 2018.

In the reporting period from July 1, 2017, to June 30, 2018, around 70,000 condominiums were offered for sale on the Internet throughout Switzerland. This represents an increase of 3.5% over the previous period. The average property listing time has declined sharply despite this increase in supply. An advertised condominium in Switzerland needed an average of 70 days to find a buyer. Compared to the previous year, this represents a decrease of 33 property listing days (-32%). The combination of a larger offer with a significant decrease in the average property listing period indicates a strong increase in the demand for condominiums in Switzerland. 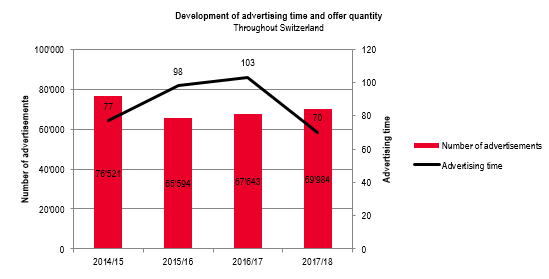 Resurgence in demand for condominiums

In the current reporting period, demand on the Swiss condominium market has recovered again. Prof. Dr. Peter Ilg, Head of the Swiss Real Estate Institute of the HWZ Hochschule für Wirtschaft Zürich sees the following reasons for the rising demand: “The currently good economy and the continued low mortgage interest rates are fueling the purchase of residential property. In addition, numerous condominiums are still being purchased as investment properties for re-letting, because there are no investment alternatives. The rise in the price of single-family homes also means that people who want to buy home ownership must increasingly turn to condominiums.”

Condominiums can be sold fastest in the Zurich region with 59 property listing days on average. In the Espace Mittelland region, too, sellers find an average buyer after only 61 days. In the regions of Vaud/Valais (65 days), Geneva (69 days), Northwest Switzerland (73 days) and Central Switzerland (75 days), condominiums must be advertised on Internet portals for more than two months. In the region of Eastern Switzerland (85 days) and Ticino (99 days), sales on average last much longer.

The comparison of the change in property listing duration of and supply volume allows conclusions to be drawn on developments in demand. All major regions are experiencing increased demand (see figure below): The regions of Central Switzerland, Northwest Switzerland, Eastern Switzerland, Ticino and Zurich saw a reduction in the average property listing time despite an increase in supply. This indicates a heightened interest in condominiums. In the regions of Espace Mittelland and Vaud/Valais, there is also increasing demand. Although the supply has shrunk only slightly, the property listing time has declined disproportionately. In Geneva, the time of property listing has been reduced disproportionately to the decline in supply, which also speaks in favor of an increase in demand. 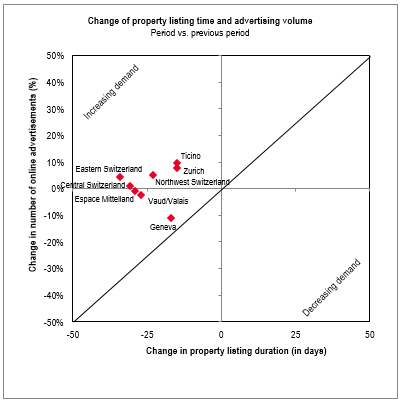 Strong differences in asking prices in each city

Once again, the most expensive condominiums in Geneva and Zurich were advertised on the Internet. On average, CHF 12’900 and CHF 12’500 respectively were requested per square meter. In St. Gallen and Bern, one square meter of net living space is offered at CHF 6,000 and 6,500 respectively, or about half the amount. In Lausanne, CHF 9,900 is required per square meter. In the other cities surveyed, bid prices range between CHF 8,200 and CHF 8,800.

OHMA is a semi-annual analysis, which reports alternatively about the development of the property listing period of single-family houses and condos on all important Swiss on-line marketplaces. The analysis covers the whole of Switzerland with its eight major regions. In-depth analyses are carried out for suburban communities and/or centers. The analysis provides information on the development of supply and demand for private homes, broken down by region and market segment.

Swiss Real Estate Institute is a foundation of the HWZ University of Applied Sciences in Business Administration Zurich and the Swiss Association of Real Estate SVIT Switzerland. In addition to research, the institute focuses on teaching and service/consulting for the Swiss real estate industry. www.swissrei.ch