That’s how the Swiss move

15% of people living in Switzerland have moved house in the past 18 months. This is shown by a recent survey carried out by homegate.ch regarding moving habits in Switzerland. Notably, it would seem moving habits change with age. Younger people move house more often, further away and tend to live in rented accommodation. Older people are somewhat more settled, preferring to stay in the same area and, financial circumstances permitting, are also interested in buying property.

15% of Swiss people have moved in the last year and a half. Younger people move house more often, and at 31%, this is over double the average throughout Switzerland. Of this 31%, three-quarters live in a rented property. Among 45 to 59-year-olds, 30% moved out of properties that they owned (at 40%, this proportion is even higher among 60 to 79-year-olds), while this proportion is less than 15% among younger people.

Renting property is the most common living arrangement and is especially popular with young people (82%). From the age of 30, the purchase of property becomes a hot topic, but less than 30% buy a house or apartment or build one themselves.

The most frequently given reason (44%) for packing the boxes is a change in living situations (e.g. family reasons), followed by professional reasons (18%). Among the younger respondents (15 to 29-year-olds), far more of them, almost a quarter, move due to work. When buying a property, work is rarely a decisive factor in moving.

In order to find a suitable home, those looking are concerned with price above all, followed by location and the number of rooms. The travelling time to work and public transport connections are among the most important criteria in Switzerland, the land of commuters. The bus and train connections are especially important for young people. In Romandy and Ticino, these aspects are more important than in the German-speaking cantons, where options to buy in the area are more strongly prioritised in comparison.

The older generation are loyal to their areas

More than a third move within the same area or canton and only a quarter change this when moving. Among the younger generation, the proportion of people moving to another canton rises to 30%. Conversely, 50% of 45 to 59-year-olds stay loyal to their place of residence.

Younger people tend to take more risks; over 40% move to a new area that they do not know or barely know at all. This also decreases more and more with age. Among 60 to 79-year-olds, less than a fifth move to a location they do not know.

The study comprises a systematic analysis of the moving habits of Swiss residents. 824 people aged 15 to 79 in the German-, French- and Italian-speaking parts of Switzerland were interviewed between 16th February and 1st March 2018. The study was carried out by LINK Institute Zurich on behalf of homegate.ch.

Homegate AG was founded in 2001 and has since developed into a leading digital company in the Swiss real estate market. With more than 8.5 million visits, as well as over 85,000 current real estate offers, homegate.ch is the number one Swiss property portal (Net-Metrix Audit 4/2018; Visits). Homegate AG employs more than 80 people in the headquarters in Zurich and in Lausanne. Homegate AG belongs to the Swiss media group Tamedia AG; another shareholder is the Zurich Cantonal Bank. 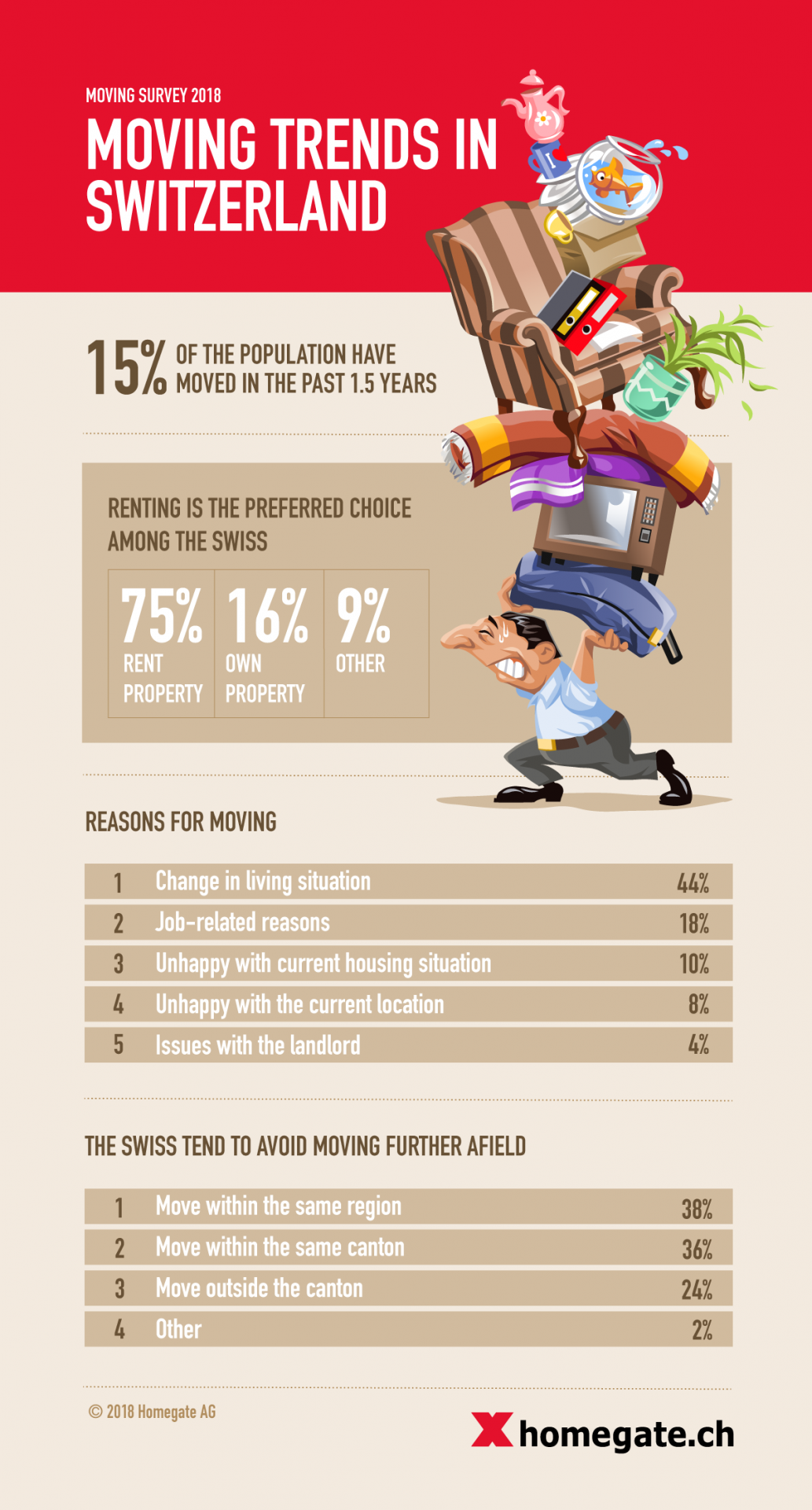