Single-family homes (EFH) once again proved popular in Switzerland in 2017. An analysis of supply and demand based on real estate advertisements shows that a predominantly stable to rising demand for single-family homes can be identified both across Switzerland and in the individual regions.

These findings are from the Online Home Market Analysis (OHMA) carried out by homegate.ch in cooperation with the Swiss Real Estate Institute at the HWZ Zürich University of Applied Sciences.

In the reporting period from January 1st, 2017 to December 31st, 2017, around 31,100 single-family homes were advertised for sale on Internet portals throughout Switzerland. Supply has therefore risen by approximately 3% when compared to the previous year. Average time on the market has decreased by 9 days to 95 days. This testifies to the increasing demand for family homes on the Swiss market.

Single-family homes are once again more popular than condominiums

Prof. Dr. Peter Ilg from the Swiss Real Estate Institute at the HWZ Zürich University of Economics and Business thinks there are a number of various reasons behind this development: “Factors such as physical distance from the neighbors and a garden for the children are rising in importance for home buyers in a Switzerland that is increasingly densely populated. In addition, there is a growing belief that you can’t do much wrong in the long run by buying a growlingly scarce building plot.”

Property in Zürich and Eastern Switzerland sells the fastest

Apart from in central Switzerland, the average time on the market has decreased in all regions included in the analysis. With a decrease in average market time of 13 and 12 days, respectively, the markets in Eastern Switzerland and the Geneva region have become the most strained.

From this simultaneous change in market time and the amount of property on offer, we can conclude there has been a change in demand (see figure below): In the Ticino region, the number of days on the market has decreased, despite many more houses being advertised. This suggests Ticino experienced a significant increase in demand for single-family homes. Growing interest in single-family homes can also be found in eastern Switzerland, the Geneva region, and northwestern Switzerland. The regions of Vaud/Valais, Espace Mittelland, and Zürich remain unchanged. Only in central Switzerland is the demand slightly decreasing. 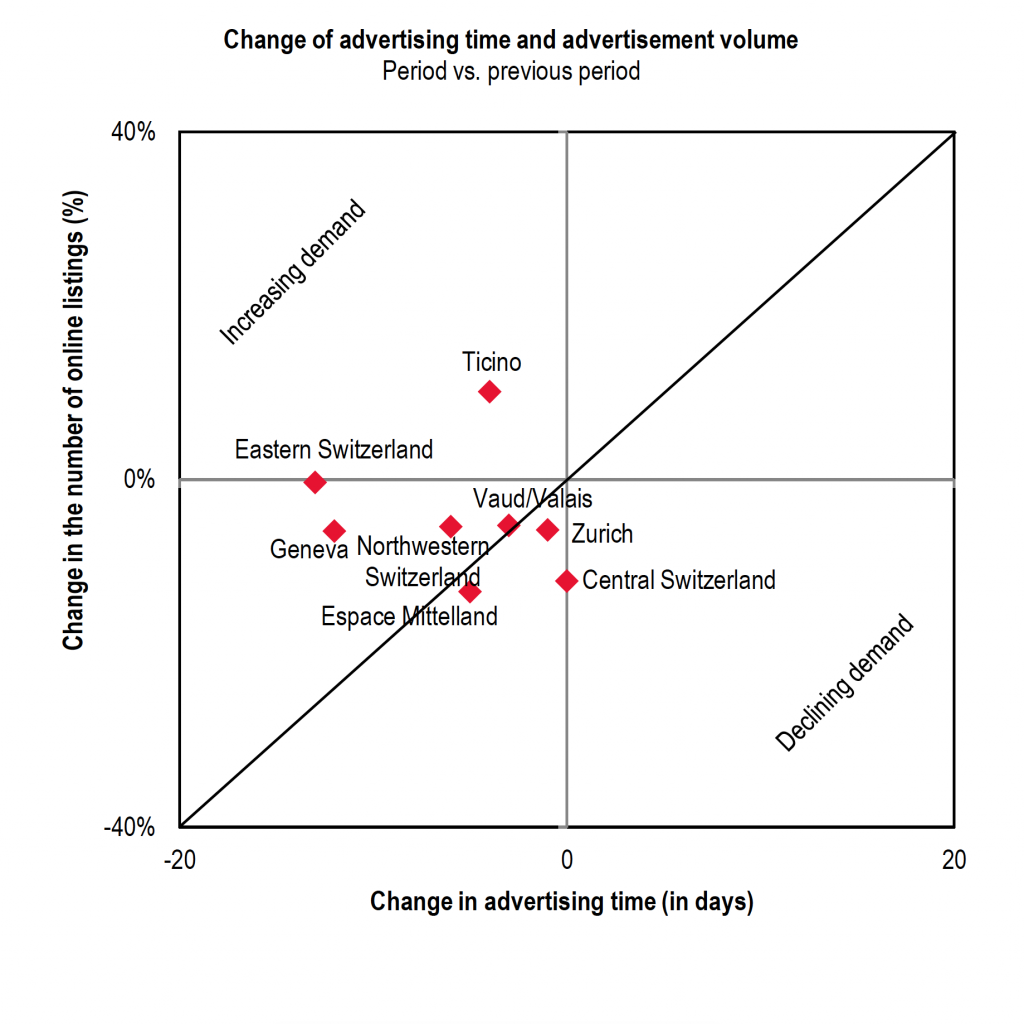 In this reporting period, the highest average prices for single-family homes were once again in the  Geneva region. A single-family home in the urban belt around Geneva costs on average CHF 10,100 per square meter of net living space. The same home costs about half, around CHF 5,400 in the Espace Mitterland region urban belt. Urban municipalities in the Zürich region are ranked in third place behind central Switzerland (CHF 8,700) compared to a figure of CHF 8,600 across the whole of Switzerland.

The OHMA reports biannually on market times for single-family homes and condominiums alternately and takes all of the major Swiss online marketplaces into consideration. The analysis covers all of Switzerland, with an examination of the eight major regions. Suburban communities and centers are also subject to an in-depth analysis. The analysis provides information on developments in supply and demand for private homes, broken down by region and market segment.

homegate.ch has published this analysis in collaboration with the Swiss Real Estate Institute at the HWZ Zürich University of Applied Sciences.

The Swiss Real Estate Institute is a foundation based at the HWZ Zürich School of Economics and the Swiss Association of the Real Estate Industry SVIT Switzerland. In addition to research, the institute is focused on teaching and service/consulting for the Swiss real estate industry. www.swissrei.ch