Despite higher vacancy rates and decreasing immigration, liquidity in the Swiss housing market remains at a high level. The reason for this is home-grown: Domestic Relocation Slightly on the Rise.

Between August 2016 and July 2017, nearly 400,000 households relocated within Switzerland. This shows an analysis of the home address forwarding orders the Swiss Post Office received during that time. The relocation rate has increased by nearly 6% compared with the last relocation report of 2014. At the same time, the inflow of potential housing seekers from abroad has dropped dramatically. However, liquidity in the housing market has only dropped off slightly. At 10.5%, the 2017 the relocation rate throughout Switzerland remains at the same level it was three years ago (2014: 10.6%). The current homegate.ch relocation report shows regional differences and highlights the background for ongoing developments.

The Relocation Rate as a Liquidity Meter

The relocation rate compares the number of relocations with housing availability, and is regarded as a benchmark for measuring liquidity in the real estate market. The higher the relocation rate, the more liquid a market region is. In addition to evaluating at the cantonal level, the current report also analyzes changes in district level as well as the ten largest cities. The relocations are divided into three categories: Relocations within a canton (or district or city), new people coming in from the rest of Switzerland who are looking for housing, and transfers from abroad. 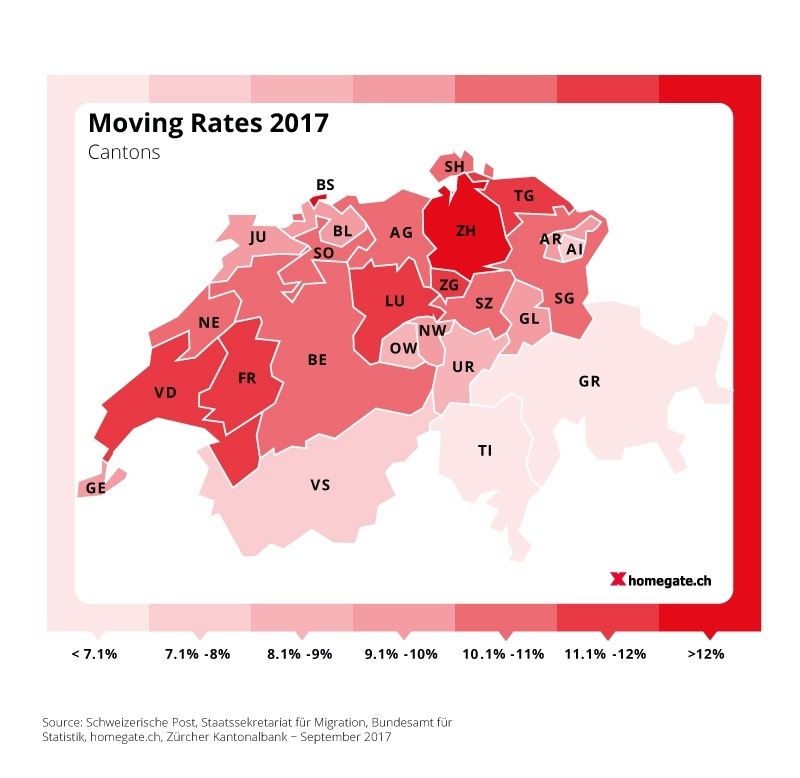 The Canton of Zurich has the Highest Relocation Rate

With a relocation rate of 12.6%, the canton of Zurich has the most liquid housing market, followed closely by the cantons of Basel-Stadt and Zug. Although at first glance the three cantons are very similar in terms of the high relocation rate, the analysis of the individual components shows a clear difference in their composition. Whereas in Zurich housing changes within the canton are by far the most significant, housing relocation within the semi-canton at Rheinknie is more marked by immigration. On the other hand, in the Canton of Zug, there are above-average numbers of those moving into the area from outside the canton.

Few Relocations throughout the Swiss Confederation and beyond the Gotthard

The cantons of Graubünden and Ticino bring up the rear at 6.3% and 6.7% respectively. The Canton of Ticino, in particular, shows the relatively low percentage of non-cantonal residents looking for housing. On the one hand, this low value may be linked to the language barrier. On the other hand, the Alps do form a natural border. Ticino has “moved” closer to German-speaking Switzerland due to the new Gotthard Tunnel, but relocation behavior does not seem to have influenced this until now. 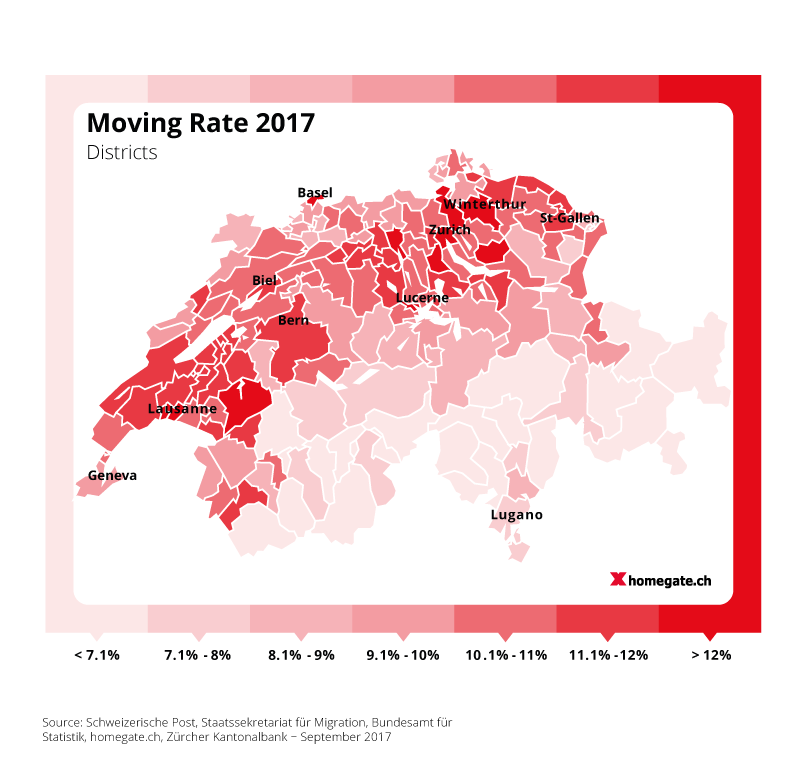 High Relocation Rates within the Cities…

Relocation flow analyses at the district level show a detailed picture of relocation behavior. In particular, urban areas around the major centers exhibit high liquidity. Of the ten largest cities, only Geneva and Lugano show below-average relocation rates. Zürich has the highest relocation rate. The fact that housing in urban areas changes hands more frequently is primarily due to the low residential property rate in the cities. Tenants generally show a higher willingness to move than households that have realized the dream of home ownership. Because selling property is significantly more complex than terminating a lease. 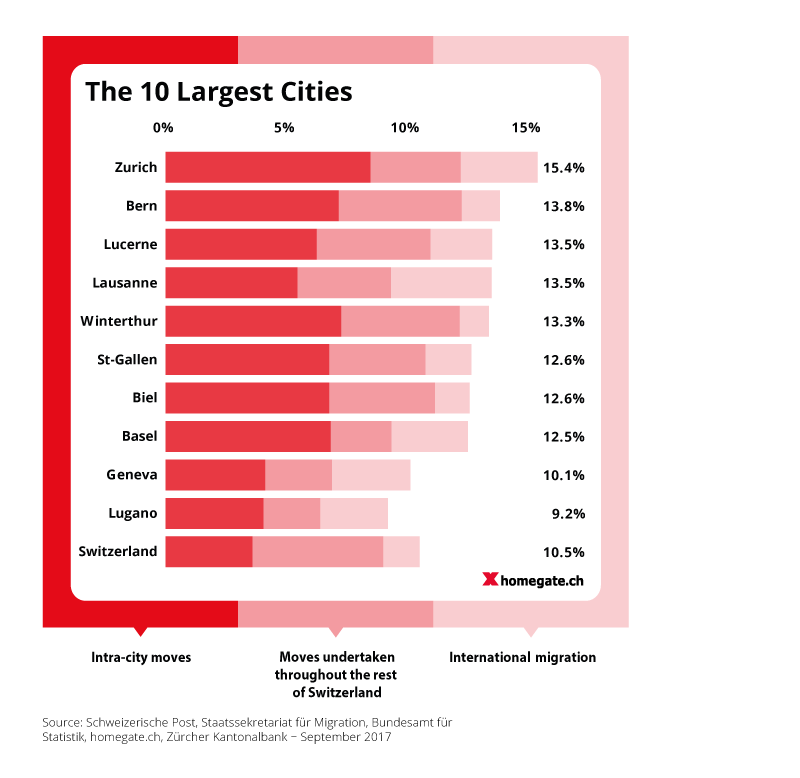 This analysis of the relocation rate once again proves that caution is required when interpreting real estate market indicators. The recently published rising vacancy rates point to an increasing relaxation in the housing market, but the country-city drop still remains. In the large metropolitan centers, the vacancy rate remains extremely sluggish. However, the chances of finding an apartment in the city are greater than the vacancy rate would suggest. As the relocation report shows, the market liquidity in cities is very high. Due to the growing presence of online advertisements on real estate portals, the transparency in the housing market is increasing significantly. This means that more and more, apartments rarely remain empty between changes in tenancy. This is borne out by comparing the vacancy rate to the relocation rate. Cities with a low vacancy rate tend to have high liquidity. An exception to this are the cities of St. Gallen and Biel, where it would be particularly easy for apartment-seekers to find housing. A way above-average number apartments are empty at any one time in both of these cities. At the same time, their liquidity with relocation rates of 12.6% is very high. 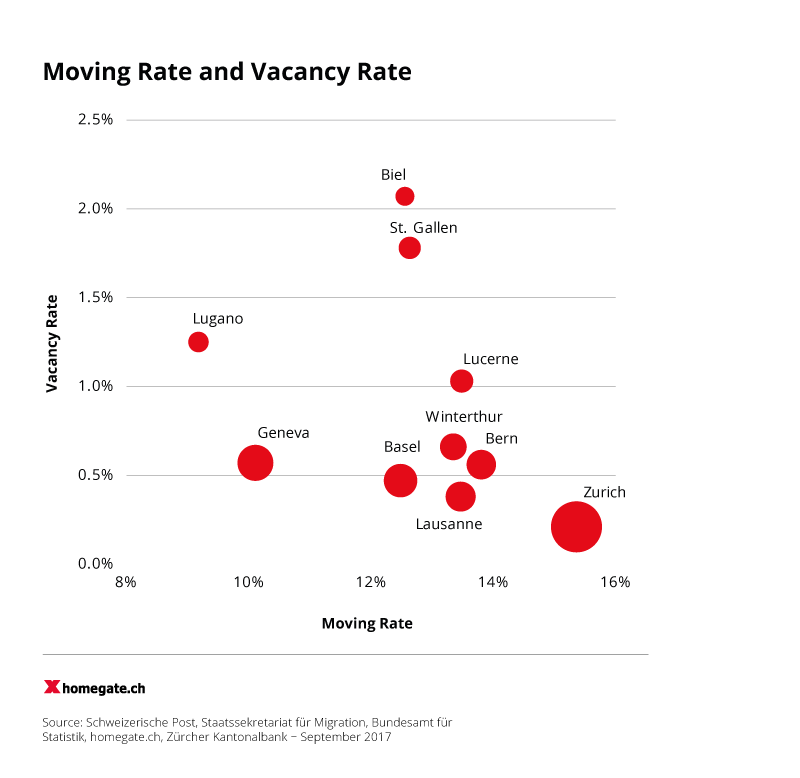 This is the fourth homegate.ch relocation report that Zürcher Kantonalbank has issued since publishing its first three in 2010, 2011 and 2014. The Swiss-wide relocation rate remains relatively stable and has decreased only slightly. The negative effect of declining immigration was largely offset by the increased relocation that took place within Switzerland. Comparing cantons over the years shows slight displacements in the order, at least in the middle ranks. For example, this year, canton Vaud ranks fourth in the line-up for the first time, compared with its previous seventh place in 2011 and 2014. On the other hand, the relocation rate in St. Gallen has dropped. For the first time since 2011, the eastern Swiss canton shows below-average liquidity.